Few people realise that crocodiles have occasionally been found as far east as Fiji. There are three records, two are more or less "authenticated" by being written down, while the third depends upon the failing memory of an old villager. The first record stems from William Mariner, an English pirate who was captured by the Tongans in 1806. He remained in Tonga until 1810 and later wrote about his experiences. His crocodile story is secondhand, stemming from a Tongan called Kaumoala.

Kaumoala spent some time in Fiji building canoes and collecting sandalwood. Kaumoala told Mariner that in the salt?water lake on Vanualevu there was a large animal that ate a number of people. Eventually this "demon" was captured and presumably eaten. Incidentally the people around this lake seem to have had a rough time of it. There used to be a hot spring near the village which received many visitors. The burden of hospitality proved so crippling that the chief ordered that the spring be covered with soil. Surprisingly perhaps this had the desired effect, the spring stopped running (it presumably forced a new channel to the sea) and the expensive visitors stopped arriving.

The second record comes from Rotuma at the turn of the century. A homicidal maniac who had been sentenced to death and then reprieved was digging in his garden when he discovered a crocodile. True to his violent tendencies he killed the giant reptile with his digging stick, no mean feat considering the toughness of crocodiles. Rough justice for the croc which must have swum several hundred kilometres to get there.

Just to show that the records are randomly distributed, the third report comes from Kadavu. A resident crocodile fed on village dogs in the 1920s or 30s until it was caught and eaten. Fortunately (or unfortunately, depending upon your point of view) crocodiles have not managed to establish a viable population here. The individuals that have made it are stragglers from the Solomon Islands or Vanuatu. The Solomons seems a better bet as there is a thriving crocodile population in a lagoon on the south?eastern end of Guadalcanal. They would have had trouble establishing here because of the lack of large vertebrates necessary to provide them with a food supply.

I have the utmost admiration for crocodiles. They have survived, virtually unchanged for many millions of years and yet seem destined to survive for several million more, as long as man leaves them alone. This of course pre?supposes that the crocodiles leave man alone!

In northern Queensland and Northern Territories it has been illegal to hunt crocodiles for a number of years. Crocodiles are ridiculously easy to shoot. To go on a crocodile hunt you need a good spotlight, a gun and a boat. You don't even need to stalk them. Their eyes shine like cats eyes and it is a simple matter to mesmerise them in the spotlight and shoot between the eyes. This is precisely what the hunters were doing and as they were taking the large crocs, they removed much of the breeding stock. Croc populations plummeted to the point where they appeared to become threatened. The Australian Government then made them a protected species with gratifying results, particularly if you are a crocodile. This had an adverse effect on people.

During the "open season years" it became safe to swim in billabongs and coastal rivers as all dangerously large crocodiles had been killed. Old habits die hard and many were unwilling to give up their swimming when the moratorium was imposed. As crocodile numbers built back up there were a number of tragedies, as unwary swimmers became croc tucker. In north Queensland and the Northern Territories there is still debate over the protection. Many claim that they should have the right to swim where they want without running the risk of being crocodile food. Others, most notably nature tour operators, are delighted to have the antediluvian creatures back in reasonable numbers. Commonsense now prevails. There are warning signs throughout the top end of Australia. These spell out, in no uncertain terms, that crocodiles are deadly. Swimming or fishing while in the water is just asking for trouble. Even walking too close to swamps or streams or sleeping on the banks is dangerous.

This sounds unduly restrictive but it isn't as bad as it sounds. Inland freshwaters with no tidal connection to the sea or connected by waterfalls are usually safe. Besides, no one swims in the sea in the top end during half of the year anyway. Then the risk of death from stings of the box jellyfish, far outweigh the dangers presented by the saltwater crocodiles. Furthermore most of the navigable rivers are dangerous for another reason. Most contain very healthy populations of the bull shark Carcharhinus leucas.

All in all, the risks imposed by the crocodiles are more than made up for by the spice of danger that they impart to all lives! I was lucky enough to visit a crocodile farm near Darwin and was able to go behind scenes and gain a better appreciation of the animals than the average tourist. My first impression, reinforced during subsequent visits, was that everyone took these huge predators very seriously. Keepers who had fed the same animals for years distrusted and feared them. No blasé Aussie macho here.

I was allowed into the main pen when they were being fed (on chickens from a nearby battery). Their feeding approach depended upon their rank. The biggest bull fed first, followed by the others in a strict hierarchy depending upon their size and position in the "pecking order". The big guys launched themselves out of the water directly at the chicken, rather like that scene in Crocodile Dundee where the inappropriately dressed but totally delectable heroine gets attacked. Smaller animals approached by stealth, often along the shoreline, unlike the big crocs which rushed it at right angles.

However the most frightening demonstration came in one of the breeding pens. I had looked at this quiet 10m by 10m pool on several previous trips. I saw no crocodiles and assumed it was empty. This belief did not stop me from dissuading two lunatic youths who wanted to climb the fence. The keepers approached this pool with trepidation and ordered me behind the wire (I had been in with them up to this point). I was changing film when there was an enormous splash and 5m and over a tonne of crocodile left the water like a cruise missile. The keeper lost the chicken and nearly his hand before anyone had time to react. The week before, the crocodile ignored the chicken and grabbed the $800 portable P.A. system which still lay on the bottom of the pond, no one was game to try and retrieve it.

There are many myths about crocodiles that need to be shattered. I've been guilty of perpetuating one of them myself. I was always taught that reptiles are incapable of rapid movement because they hold their legs spreadeagled at their sides. Go near crocodile water with this belief and you could be dead. Crocodiles can not only lift themselves so that their legs are below them just like any fleet?footed mammal, but they can also gallop! This observation, made by several astute field biologists has always been pooh?poohed by the experts until recently. Someone managed to record it on film. A galloping crocodile can move much faster than you or I. No wonder then, that there is no macho Aussie male nonsense amongst the people who work with them. 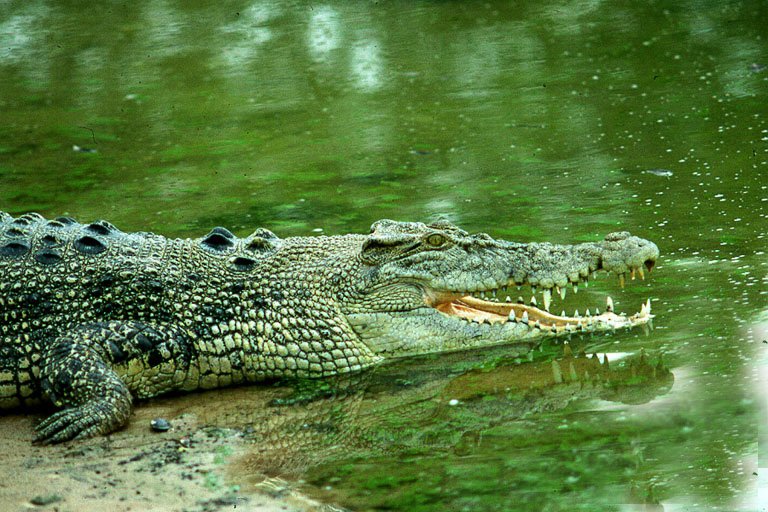 My visit to the Northern Territories finished on a high note. I went to Kakadu National Park. During the day I went out and looked at basking crocodiles while at night I went to look for frogs. I didn't want to become croc tucker and asked for advice from the locals. "No problem", they said, "keep an eye on the croc and when he disappears move". I went down to the billabong in the gently falling rain, almost deafened by the chorus of randy frogs. Photographing them wasn't a problem except for one species down by the water's edge. I shone my torch over the billabong and there, heart stoppingly, was the reflected eye glow of the 5m resident bull less than 30 m away. I backed slowly up the bank, as did my nervous companions. While they kept an eye on the croc, I tried to concentrate on the frogs. Nerve-wrackingly the old bull kept coming closer. As he did so we retreated further up the bank. Suddenly there was a surge from the saurian, a petrified scamper up the bank by us, and a forlorn squawk from an inattentive duck. Adrenalin coursed though us and our hearts pounded in sudden fear. There were a couple of loud clacks as the crocodile rearranged the duck in his jaws followed by the perfectly audible sound of bones snapping.

It was a very chastened Paddy who went to bed later that night. I needed to calm my shattered nerves with a few schooners of the local brew first.