Dragons, they fill the story books of most us and are central to a number of South-East Asian legends. Dragons, it seems, usually possess a pair of wings and breathe fire through their nostrils. They also have a predilection for eating virgins. Presumably virgins taste better?

The commonality of dragon legends is a little surprising and not a little worrying. I am naive enough to believe that many legends are based on a kernel of truth. The problem is to determine what the kernel is in this instance? Large flying creatures have co-existed with modern man ever since we climbed down from the trees. Continental people are familiar with the giant eagles which live amongst them whilst coastal or seagoing people are well aware of the giant albatrosses and petrels they encounter on fishing trips. I find it unlikely that people who lived so close to nature could confuse birds with the fearful unknowns posed by dragons.

What other candidates are there? Well, the totally credulous can claim that dragons really did exist and that we just haven't found their remains yet. Others, like myself wonder whether this suggestion is any more ridiculous than the one I am about to promote (albeit not too seriously!).

The dinosaurs died out about 65,000,000 years ago. Many, many "explanations" have been put forward in an attempt to explain this mass extinction (one of several in the earth's history). One of the most convincing posits an asteroid impact with the earth which led to several years of extremely heavy dust cloud cover associated with a substantial temperature drop. According to this scenario all life suffered, but the dinosaurs became extinct. Well the flying reptiles, the pterodactyls and the pterosaurs (popularly considered dinosaurs although they weren't) were highly mobile. It is marginally possible, particularly if they were mostly carrion and fish feeders as appears to have been the case, that some species were able to survive this evolutionary holocaust.

Their ecological successors were the birds. It is hard to conceive of any flying reptile as efficient as a bird, even allowing the formers warm-bloodedness. Ultimately one would expect their niches to be taken over and extinction would rapidly follow. The only winners in the competition for food would be those big enough and strong enough to dominate the supply and the only situation of which I can conceive in which this would work would be amongst carrion eaters.

On the African plains there are several vulture species. Their feeding success is related to their size, but not in the manner in which you might think. Vultures are soaring birds which utilize thermal upcurrents to provide them with the altitude they require to scan large areas. When they spot prey they spiral downwards and gorge themselves as rapidly as possible. Other vultures watch not only the ground but their compatriots. The sight of one heading earthwards is a signal for the rest. Soon the carcass is a seething mass of vultures competing for the last bloody gobbet. They get a good feed unless a larger species drives them away (or hyenas or lions but that is another story). The bigger species do dominate the food supply and drive off their smaller relatives. How then do the smaller species survive? 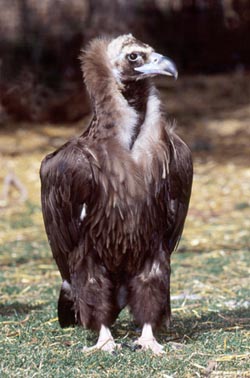 The answer is relatively simple. Small vultures can fly much earlier in the day than their larger relatives. They are "early risers" in every sense of the phrase and can catch minute updrafts as the day heats up. The larger species must stay abed until the thermal elevators are really up and running. The hour or two the smaller species receive is all they need, by the time the big guys turn up they've already had breakfast and are thinking about lunch. This is where my flying reptile scenario comes in. If any of the giant pterosaurs such as Quetzalcoatlus with their 13m wingspan and 65 kg weight survived past the great extinction they would have made marvelous candidates for dominating the carrion of their day. Incidentally, the figures just quoted for their size are conservative. When Quetzalcoatlus was first brought to scientific attention the estimated wingspan was 59' (18m), a size just too enormous for their scientific peers to accept. Hence when the formal description was finally published, the referees had reduced the theoretical size to a still enormous but slightly less mind boggling 13m. What a sight Quetzalcoatlus would have made silently gliding in to feast, their shadow making them seem even more huge than they really were. Were these creatures and their ilk the dragons? Did they survive until recently enough to be incorporated into our accumulated folklore? I doubt it very much, because accumulated scientific wisdom says no, but scientific wisdom has been wrong before. I like my dragon/pterosaur scenario and I shall let go of it with reluctance.