This is where Jared Diamond and his wonderful book The Rise and Fall of the Third Chimpanzee come in. He takes the subject of skin colour and turns it on its ear. People have black skin to protect themselves against the harsh tropical sunshine right? White skinned people who spend a lot of time in the sun get skin cancer. Thus goes the orthodoxy but is it true?

Diamond points out that as selection factors sun burn and skin cancer are trivial. In this he may not be correct as natural selection is free to work on all aspects of our survival, even trivial ones. Nonetheless many skin cancers do not manifest themselves until later in life, often after our breeding and rearing is long since over. We'll put this one into the "unproven" basket and continue.

Many theories have been out forward to explain skin colour. A fascinating one concerns Vitamin D production which takes place just below the pigmented layer. According to this theory, dark skin evolved to prevent over production of Vitamin D that may be toxic in large doses. The corollary is that white skinned people such as Scandinavians evolved pale skins to prevent rickets --- a deficiency of Vitamin D.

If these theories don't convince, try some of the following which range from the ingenious to the crackpot (I'll let you decide which is which). Dark skins protect our internal organs against overheating by infrared (how many whites die of this "tropical disease"?), dark skins help keep tropical people warm when the temperature drops, dark skins provide camouflage in the jungle, pale skins are less sensitive to frostbite, dark skins protect against beryllium poisoning in the tropics, pale skins cause a deficiency of folic acid in the tropics. 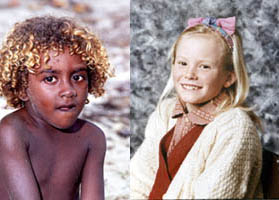 If none of these appeal on their own you can always mix and match them. Before you do, stop and question the basic assumption. Do all people in the harsh tropics have dark skins? If dark skins pose such an evolutionary advantage in this environment you'd expect all tropical peoples to be dark. You certainly wouldn't expect to find dark skinned people in temperate latitudes.

Well there are no native dark skinned people in central or South America, even those living right on the equator. Tasmanian aborigines were as black as any from the far north. In the Solomon Islands there are substantial differences in skin colour over short distances. The same is also true in Fiji. Diamond points out that some of the world's most dimly lit areas, receiving a daily average of under three-and-a-half hours sunshine, include parts of equatorial West Africa, southern China, and Scandinavia. These areas are host to, respectively, some of the world's blackest, yellowest and whitest people.

The response to this of course is to argue that the people possessing the skin colour under question (pale skin in the tropics, dark skin in temperate regions) have not been there long enough to evolve the "right" colour. Diamond counters this by pointing out that the Tasmanian aborigines have been isolated there for over ten thousand years and that the Scandinavians either had pale skin when they arrived in Scandinavia or evolved it in the 4,000 to 5,000 years since they have been there.

Puzzling isn't it? Diamond does not deny that there is a correlation between skin colour and place of residence but he claims it is weaker than appears at first sight. What then is his explanation for the multiplicity of hues all over the planet?

People tend to breed with like. Only since modern technology has made us more aware of human variability and variation have we been able to find people of other races particularly attractive. Diamond quotes a New Guinean friend on white women:

"white skin like a sickly albino's, straight hair like strings, sometimes even hair coloured yellow like dead grass or red like a poisonous snail, thin lips and narrow noses like axe blades, big eyes like a cow's, a repulsive smell when they sweat, and breasts and nipples of the wrong shape."

Beauty is in the eye of the beholder.